Why I Chose a Single Sista to Adopt by Baby 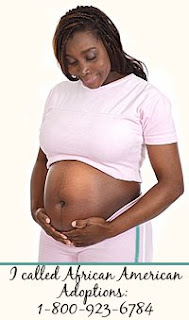 This is the story of Shameka, an African American woman who was facing an unplanned pregnancy:

I found out that I was pregnant during the summer time. I was having a cool time hanging out with a lot of new people, and the baby daddy was someone that I had just met. He was cute and smart…a college guy that was home on break. That was cool with me because I was also home just for the summer and had plans to start college in the fall. He and I got together, and the next thing that I knew, I was taking a pregnancy test.

There was so many things that ran through my head when I found out that I was pregnant. To be honest, there were so many thoughts that I actually could not focus. It was terrible. I told the baby daddy and he told me that he didn’t want any children at this point in his life. I didn’t want any either, but here I was knocked-up and having to make all types of new decisions.

I decided that abortion was not gonna happen. I had known people that had gone through that process and let’s just say, they hated it and they hated themselves afterward for doing it. But, I really was considering adoption, that way someone else that maybe couldn’t have a baby on their own could be happy and I would be free to move on with my life also.

So, I made some calls, did a little research online, and finally was ready to learn about adoption. It was not a very “comfortable” time in my life, not only because of the situation being what it was, but I was experiencing horrible bouts of morning sickness. I placed a call to African American Adoptions Online:
1-800-923-6784. It was one of the toughest calls I’ve ever made, but I made it through and I felt that my mind was a little less fuzzy afterward.

The adoption counselor and I spoke pretty in-depth about what I wanted for this baby. I told her that whoever adopted my child needed to be strong, African-American like me, and respected. I wasn’t ready to be a mom, but I know what a good mom and parent should be.

As time when on, my adoption counselor and I had narrowed it down to two families. I would have to decide between this really great couple and a single African-American woman that wanted to be a mom. The adoption counselor was kind of shocked when I told her that I picked the single woman. But, in my heart, I know that it was the right decision for this child. Here’s why…
Click here to read the rest of Shameka’s story…